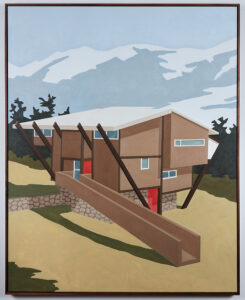 Eliza Gosse's work 'Spoonfuls of Milo at Kosciuszko' is a finalist in the 2020 Wynne Prize at the Art Gallery of New South Wales.

The Wynne Prize is awarded annually for 'the best landscape painting of Australian scenery in oils or watercolours or for the best example of figure sculpture by Australian artists'. This open competition is judged by the trustees of the Art Gallery of NSW. Eliza Gosse's work 'A Triangle of Vegemite Toast Lay Forgotten Under the Mustard Chair' is a finalist in the 2020 Mosman Art Prize. Congratulations to Eliza Gosse who is a finalist in the 2020 Ravenswood Australian Women's Art Prize with her work "He Watched Cars Passing By Beyond The Cracks In The Curtains", 2020, oil on canvas, 120x150cm.

Artwork judging is overseen by Ravenswood Australian Women's Art Prize Patron and acclaimed artist, Jennifer Turpin and the winners will be announced 26 May 2020. 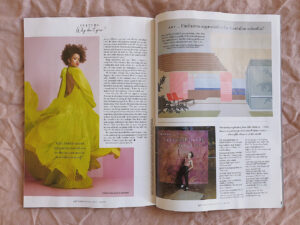 To coincide with her exhibition 'Mini Mokes and Mini Skirts', Eliza Gosse is featured in the April edition of Harpers Bazaar magazine The Ravenswood Australian Women's Art Prize is an annual prize that was launched in 2017 to advance art and opportunity for emerging and established female artists in Australia. There are two prize categories, including a $35,000 prize — the richest professional art prize for women in Australia. Artwork judging will be overseen by Ravenswood Australian Women's Art Prize Patron and acclaimed artist, Jennifer Turpin, and announced at the exhibition opening on 31 May, 2019.

Eliza Gosse is a finalist with her work 'Your Yellow Brick Holding Up the Sky' 2019, oil on canvas 50 x 40cm 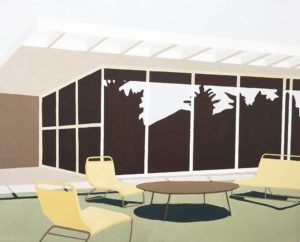 Delving into social issues of national identity and immigration, artist Eliza Gosse focuses on the post-war houses built for European migrants in her home country of Australia in the 50s, 60s and 70s. In her striking oil paintings, Gosse’s style combines clean, color blocked geometric forms that call to mind the utopian ideals of suburban planning with a ‘nostalgic
inflection’. The ‘Suburban Modernism’ that she has created is a response to her interests in design history, the initial impact of inexpensive post-war architecture on communities and the way that the design’s influence and meaning is viewed over time. In her paintings of the Australian (and to a lesser extent, American) suburbs she celebrates an era of design that mocks the unflattering stereotype of bland suburbia and celebrates the unabashed invention of the time.

ELIZA GOSSE IN 'THE IDEAL HOME' AT PENRITH REGIONAL GALLERY The Ideal Home presents a history of the 20th century Australian home told through household objects, furniture and design classics from the MAAS Collection.

For much of the 20th century Australia enjoyed one of the highest rates of home ownership in the world. This situation emerged following the landmark ‘Harvester Judgement’ of 1907, which enshrined a ‘living wage’, and enabled ordinary workers to purchase a home and support a family.

Post war affluence, technology, mass manufacturing and the ready availability of goods, created both a consumer base and desire. In this setting, suburbs grew and homes became our castles. Australians enthusiastically adopted international trends in architecture, interior furnishings and design. Labour saving devices liberated us from domestic drudgery and increased the time available for leisure. Indoors and outdoors Australians aspired to a lifestyle centred upon the comfort, style, amenity and function of the home.

The Ideal Home presents a history of the 20th century Australian home told through household objects, furniture and design classics from the MAAS Collection. See more of The Ideal Home including modernist design and artworks at MAAS Powerhouse, Ultimo.

The Ideal Home is a partnership between the Museum of Applied Arts and Sciences and Penrith Regional Gallery & The Lewers Bequest.

The exhibition suite features works across the site from the following Australian artists: In 2018 the grant was awarded to Eliza Gosse. 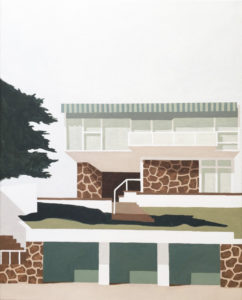 With an annual prize pool worth $12,000, the Waverley Art Prize is open to painting, drawing print & mixed media.

Eliza Gosse's work "Lone Ficus on New South Head Road is a finalist in the 2018 Prize. Eliza Gosse's work is included in the 2018 Ravenswood Australian Women's Art Prize. The theme of the prize is resilience. Gosse's work depicts a house in the suburbs of Melbourne designed by Russian architect Antol Kagan and is part of a larger series that investigates the architecture of post WWII refugees in Australia.