Sally Nangala Mulda has been selected as a finalist in the 2019 Sulman Prize, administered by the Art Gallery of New South Wales. The Sulman Prize is awarded for the best subject painting, genre painting or mural project by an Australian artist.

Sally says of her working this years prize:

This is me outside my home at Abbott’s Town Camp in Alice Springs feeding my cats. Little cat, mother cat. One woman, my family, playing cards. Nobody bothering anybody. No papa bothering the cats! We are just sitting quietly. I like quiet. Nobody talking. 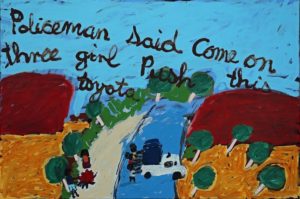 'WHAT IS MOST DISTINCTIVE about the paintings of Sally M. Nangala Mulda is that they tell us just how it is to live in Abbott’s Town Camp, not far from the mostly dry Todd River bed in Alice Springs (Mparntwe). Many of the paintings produced by Indigenous artists working out of the region use colour and pattern to evoke the romance of their connections to Country. However, Sally’s approach delivers the gritty reality of the place in which she lives, the interactions between police and Aboriginal people, the supermarket as the source of “a feed”, the tension around alcohol consumption and people sleeping rough, all set amongst saltbush, waterholes, homes and shops.' On Sally Nangala Mulda's work for 'The National' at the Art Gallery of New South Wales, Snack Syndicate for Running Dog writes:

'Sally Mulda’s narrative style mimics the pedantic, forensic language of the state while at the same time showing that such language tends to obfuscate its subjects—people who live and die. Mulda’s frank descriptions of the Town Camp index the countless different ways that black life is both constrained by, and always in excess of, white law.

Together, the paintings in the exhibition are quietly unsettling, staging a series of encounters that produce both minor affects (annoyance, confusion, amusement, affection) and their major implications. Engaging with the paintings, we feel the enormity of living under occupation, as well as the conviction that such enormity can never be total.' Curator Isobel Parker Philip talks about Sally Mulda's work for 'The National' at the Art Gallery of New South Wales:

'Sally Nangala Mulda is an artist who lives in Abbott's Town Camp in Alice Springs in the Northern Territory.

All of these scenes are painted with the same frank and stark honesty. There is a normalisation of the police presence amongst the Indigenous community that is shocking to see at first and is amplified by the regularity with which Sally paints it and that we see it again and again across the installation.

This reminds us about what life looks like for a huge portion of our Indigenous people. In this work we see the lived effects of the 2007 Northern Territory intervention. It's a brutal reminder about what reality can really look like.

Sally paints her figurative scenes and then applies text on top of them to tether each work to a particular time and place. These are diaristic documents. They're paintings that do the job of photographs or snapshots. There's a kind of direct relationship between these scenes and the real world. We read them as snapshots. We read them as kind of episodes from life as it is lived.'

This is us, this is the way it is – that’s what Sally Mulda’s paintings of life seem to say.  Paddy wagons in the river, policemen pouring out grog, an assortment of bottles and cans lying on the ground; four disconsolate people, probably men, walking away.  Dogs, children sleeping and everything in between that makes up life in the Alice Springs Town Camps, are depicted in her paintings, raw and free.