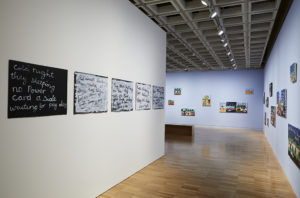 Curator Isobel Parker Philip talks about Sally Mulda's work for 'The National' at the Art Gallery of New South Wales:

'Sally Nangala Mulda is an artist who lives in Abbott's Town Camp in Alice Springs in the Northern Territory.

All of these scenes are painted with the same frank and stark honesty. There is a normalisation of the police presence amongst the Indigenous community that is shocking to see at first and is amplified by the regularity with which Sally paints it and that we see it again and again across the installation.

This reminds us about what life looks like for a huge portion of our Indigenous people. In this work we see the lived effects of the 2007 Northern Territory intervention. It's a brutal reminder about what reality can really look like.

Sally paints her figurative scenes and then applies text on top of them to tether each work to a particular time and place. These are diaristic documents. They're paintings that do the job of photographs or snapshots. There's a kind of direct relationship between these scenes and the real world. We read them as snapshots. We read them as kind of episodes from life as it is lived.'