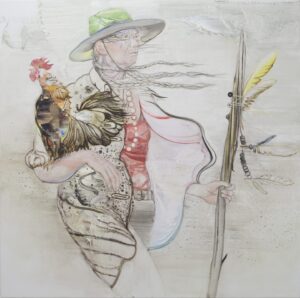 Established in 2015, the Bayside Acquisitive Art Prize is a celebration of contemporary Australian painting. The finalist exhibition brings together a broad range of artists, both established and lesser known, whose varied approaches to the painted medium conveys the breadth and diversity of painting in Australia today.

The annual prize is an important opportunity for Bayside City Council to add exceptional works of art to its collection and to promote art and artists as a valuable part of the Bayside community.

Tim McMonagle's work 'Put Upon' 2020 is a finalist in this year's prize. Lovelock is the presentation of a new suite of paintings by Tim McMonagle that have been directly informed by a new suite of sound works, produced for this project by Paul Knight, who is resident in Berlin.

Transference. The change of elemental states. The search for a place not here nor there.

These were our early concepts for the exhibition. Be careful what you wish for. Despite an unpredictable year in all corners of the globe, the original framework for the project is in place: to commission work from one artist to inform the work of the other. The idea & process is elliptical and is revealed over a period of time in three sections.

The fulcrum is a set of paintings by Tim McMonagle. They will be made using source imagery around the idea of “A Place Between / Not here nor there”. We approached Paul Knight in Berlin to create source images generated by this diaristic photographic practice. Then the pandemic happened, and nothing was the same.

In isolation in Berlin, Paul had immersed himself in his music practice, making soundscapes without traditional song structures, using sources completely derived from synthetic sounds: purely electronic space. The fit with the original concept was perfect. We devised a limit of the 12” LP to set the duration of the material. The square of the LP cover echoes Tim’s exclusive canvas ratio, the square.

The six tracks are to be issued as source material to McMonagle for his body of paintings. Tim has always hankered to work with a non-visual source for a group of paintings & this serendipitous outcome has both artists exhilarated by the possibility of extending their practice.

The final part of this work is the unification of the germinal sound work by Paul Knight,

Tim McMonagle’s paintings, and documentation of the exhibition to be presented at Greenwood Street Project in early 2021 in an LP/catalogue. Tim McMonagle intimately confronts both the fragile and robust nature of life. With an obsession for mark-making and the act of painting, he depicts humanised landscapes with whimsical contradictions of impasto and swathing washes. His paintings require a closer inspection, as dangling branches and wailing trees act like entwined torsos to question humanity’s relationship to the environment. Artist Profile spoke to McMonagle in his Melbourne studio for Issue 46. Tim McMonagle is a finalist in the 2018 Wynne Prize for landscape painting at the Art Gallery of New South Wales. He says:

'In my painting Shadow captain I was interested in capturing an imagined anthropomorphic nature. In the changing low light of dawn or dusk the large eucalyptus seems to twist and contort, fastened to the ground where it is anchored.' Tim McMonagle, 2018 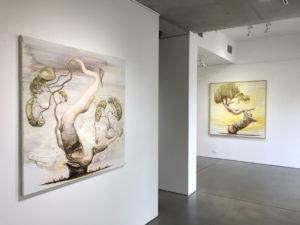 Carrie McCarthy has written a thoughtful piece about Tim McMonagle's recent exhibition at Edwina Corlette Gallery for her brilliant blog Cultural Flanerie. The article coincided with Tim's first exhibition at the Gallery which continued his exploration of our majestic native gum trees. Conceived by ACCA Curator Annika Kristensen and Associate Curator Hannah Mathews, and developed in collaboration with ACCA’s new Artistic Director/CEO Max Delany, Painting. More Painting brought together a range of painting practices that reflected the medium’s enduring importance and its recent return to the centre of much public debate.