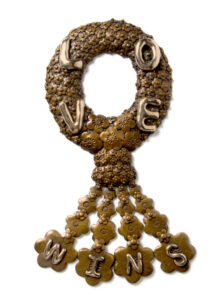 The Korea-Australia Arts Foundation Prize is run annually in cooperation with the Korean Cultural Centre.

Srivilasa's work 'The Course of True Love' is about the same-sex marriage journey. The series is realised in five bronze vignettes representing moments in world history that have contributed directly or indirectly to the acceptance of same-sex partnerships, and led Australia to pass the same sex marriage law in 2018. The moments including the Stoneware riots, Thailand decriminalising homosexuality, the establishment of Society Five, the first homosexual rights organisation in Melbourne, the Simpsons dedicating an entire episode to the same-sex marriage topic and the Yes campaign.

“I work predominantly with ceramics but for this series I chose to work with bronze. I use bronze, a robust and permanent medium to symbolise the strong concept of marriage and a solid commitment a couple makes to each other. Bronze is also a medium for religion statues. It would represent the sacred concept of marriage in my work.” …Vipoo Srivilasa

The Course of True Love will be part of Objects of Loves exhibition at Craft Victoria, Melbourne. 12 March - 13 May 2020