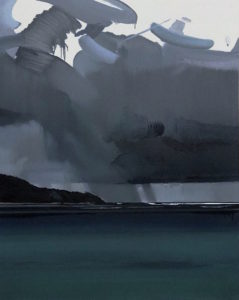 The Salon des Refusés was initiated by the S.H.Ervin Gallery in 1992 in response to the large number of works entered into the Archibald Prize which were not selected for display in the official exhibition. The Archibald Prize is one of Australia’s most high profile and respected awards which attracts hundreds of entries each year and the S.H. Ervin Gallery’s ‘alternative’ selection has become a much anticipated feature of the Sydney art scene.

Julian Meagher's work 'Wapengo #1' was selected in 2018.  Wapengo #1 is from a series painted after a recent residency on the Sapphire Coast where Meagher spent a month with his pregnant wife Beejal in Mimosa Rocks National Park. He says:

‘I wanted these oil paintings to chase the spontaneity and freedom of a watercolour. They are unashamedly romantic, painted at a time of great change just before my son was born. A time of giving in to forces far greater than me, of tides, cycles and connection to country.’