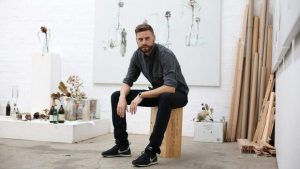 Julian Meagher's portrait of superstar National Rugby League player Johnathan Thurston is on the cover of the October issue for Rugby League Player Magazine.  Meagher was a finalist in the 2015 Archibald Prize with his portrait of Daniel Johns. The Thurston portrait is part of a suite of works from the 'Code' series which shines a light on the vulnerability of some of Australia's biggest football heroes, dramatising the precarious fragility in each man’s isolated facial expression.