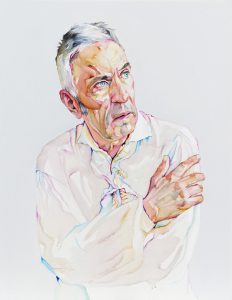 When Julian Meagher first met John Waters ‘He was rehearsing Looking Through A Glass Onion with Stewart, my girlfriend’s father, in his lounge room. They were making a lot of noise, laughing and playing Norwegian Wood. It was great to meet the man I had watched on Play School, now far removed from Big Ted’.

John Waters is an English film, theatre and television actor best known in Australia, which he’s called home since 1968.  Meagher says ‘I wanted to paint John in a puffy shirt, both as a nod to his theatrical profession and to re-imagine him as a kind of colonial character. ‘He has such a strong face, which really suited my painting style. It was my hope to capture a complex expression. Rather than looking back at the viewer, he is engaged with something outside our understanding’.

Born in Sydney in 1978, Meagher left work as a medical doctor nine years ago to paint full time and has exhibited regularly since then both locally and internationally. He studied the Atelier method in Florence, Italy. He has been a finalist five times in the Salon Des Refuses. He was a finalist in the Doug Moran Portrait Prize in 2009 and 2012, as well as in the Metro Art Prize and Blake Prize for Religious Art.