In 2017, three of Sydney’s major galleries – Carriageworks, Art Gallery of NSW and the Museum of Contemporary Art – presented the first instalment of the The National, an ambitious look at contemporary art in Australia.

Far from a quick snapshot of the art world, The National is a six-year project encompassing three shows at three galleries every two years. It features more than 100 emerging, mid-career and established artists. Each iteration speaks to the present, charting a brief arc in the story of Australian contemporary art.

Daniel Mudie-Cunningham, senior curator at Carriageworks, has worked on his section of the show for two years. He travelled around the country to meet artists and find new voices to add to a list of already-established names.

“There are connections between what we’re doing,” Mudie-Cunningham says of the three galleries and their curators. “Often there’s a particular zeitgeist, or political themes that recur.”

There are 65 artists involved in The National 2019. Tara Marynowsky is one to seek out:

'At a glance: A Sydney-based artist who doesn’t start with a blank canvas but builds on existing images, interacting with and subverting the past. She has appeared in exhibitions here and overseas.

What she’s known for: Her watercolour and gouache “interventions” on vintage postcards, which merge colour and surrealism with sepia-tinted images of young women. Her 2018 exhibition at Brisbane’s Edwina Corlette Gallery, Balancing Actress, featured vintage images of nude dancing “girls” with their faces obscured, bathed in pastel textures.

For The National: Her work starts with a more recent jumping-off point, and an angrier, more overtly political tone. For her piece, Coming Attractions, Marynowsky found 35-millimetre reels of ’90s Hollywood film trailers, including Pretty Woman, Shakespeare in Love, Species and Indecent Proposal, and took to the negatives with a knife, scratching each frame. It’s a labour-intensive and imprecise process. When the film is scanned and played back the result is a series of frenzied animations. Julia Roberts’s face is removed, making her almost monstrous. Gwyneth Paltrow is given a Medusa-like head of snakes. The dodgy gender politics of each film is subverted by force.' BROADSHEET March 2019

TARA MARYNOWSKY IN ART GUIDE REVIEW OF 'THE NATIONAL' TARA MARYNOWSKY'S WORK FEATURED IN THE GUARDIAN REVIEW OF 'THE NATIONAL' 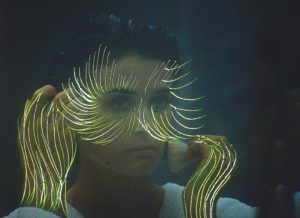 Key works at Carriageworks include Sean Rafferty’s Cartonography (FNQ), a wall of cardboard fruit boxes, everyday objects given a monumental treatment that highlights the surreal oddity of their design, and in Coming Attractions (2017-19) there’s another use of found objects. Tara Marynowsky takes 35mm feature film trailers sourced from eBay and scratches out key figures from the image, such as Julia Roberts from Pretty Woman. The result is amusing but pointed – the pretty woman is erased.

TARA MARYNOWSKY IN THE NATIONAL 2019 The Art Gallery of New South Wales (AGNSW), Carriageworks and the Museum of Contemporary Art Australia (MCA) today announced that The National 2019: New Australian Art will present the work of 65 emerging, mid-career and established Australian contemporary artists living across the country and abroad.

A major collaborative venture, The National 2019 is the second edition of a six-year initiative presented in 2017, 2019 and 2021, exploring the latest ideas and forms in contemporary Australian art.

Connecting three of Sydney’s key cultural precincts – The Domain, Redfern and Circular Quay – The National 2019 follows a successful first edition of the exhibition held in autumn of 2017 that attracted 286,631 visitors.

Tara Marynowsky will present new work for the National 2019 at Carriageworks. Sauced Material brings together a group of artists who extend the narrative or form of existing media. Their works have been shaped, moulded and crafted from film, music, personal histories and literature but with flavour anew and enhanced. This adaptive approach orients audiences to and from a new point of orbit in reference to the work. Memory is at play - but so is the politics of origin and ownership.

Within the breadth of time that has passed between the first and the now, a clear history has been created. These artists reveal that distance in their own remaking. Their approaches differ but the commentaries and techniques are crystallised and ready for service. Congratulations Tara Marynowsky for receiving a Marten Bequest Travelling Scholarship worth $20,000. The scholarship is paid over a two year period to support the scholars in furthering their artistic careers.

Tara Marynowsky will travel widely with her scholarship funds, including to New York, where she will engage with contemporary art practices, and the UK, where she will collect Edwardian and Victorian documents and artefacts. These experiences will inform her new work, which she will commence during a four month residency at La Cité Internationale des Arts (Paris). Her overarching aim is to investigate symbolism in art and cultural belonging through African American art, French symbolism and English culture. Congratulations Tara Marynowsky for featuring in the latest issue of Art Collector magazine. Tara was listed as one of Art Collector’s ’50 Things Collectors Need to Know About’ and is considered to be one of the artists who will be shaping the Australian and New Zealand art worlds in 2015. 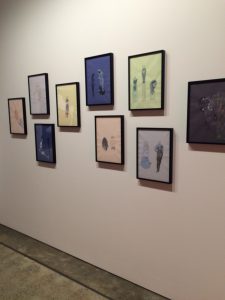 “Tearing open the ‘perforated pages’ of the Artbank collection, Sealed Section reveals works that canvas the topics of impolite dinner conversation: sex, politics and religion. Underpinning these often controversial topics is a consideration of the complexities of human relations and the human condition. As a result, Sealed Sectionincludes a rich and diverse group of works that highlight the strength and pertinence of contemporary art as a response to the key issues of our time.”