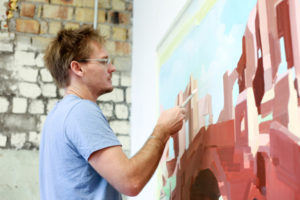 'The 45-year-old came to his practice ‘in a round about way’. He tried out a range of jobs and a degrees not associated with art, before landing in New York for six months, where he enrolled in the New York Studio School. ‘This is what really kick started my painting career,’ he recalls. ‘Now I work in splendid isolation on the Sunshine Coast in Queensland.’ Congratulations to Stefan Dunlop who is a finalist in the Caloundra Regional Gallery's Sunshine Coast Art Prize. The prize is a national contemporary two-dimensional award with an acquisitive prize of $25,000 plus a studio residency at Montville Country Cabins. The winner will be announced on 1 September 2016. View Stefan’s available works here.