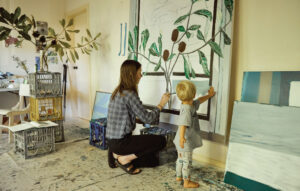 The concept of home has changed in 2020. For a lot of people, home has never been just one static place, and yet in the last few months that stasis has been forced upon us. In the midst of shelter-in-place orders, we’ve been directed to decide on a single location that represents our place in the world and stay there, hoping it keeps us safe.

Reframing the domestic space as a new landscape intrigues artist and new mother Sally Anderson. Her new body of work is entitled Bridal Veil Falls, the Window and the Piano Lesson, and was created almost entirely in lockdown. The pieces will be on display at Edwina Corlette gallery in Brisbane from tomorrow, in an exhibition that explores the fusion between Sally’s subjective experience of parenthood, and the collective endurance of pandemic paralysis. Sally Anderson — Arm of the Sea and the Fertile Tree

“To help my son sleep we put on white noise of a small river in Scotland and Llyn Gwynant waves in Wales. The toponomy of Lismore indicates it was named after Isle of Lismore which lies in Loch Linnhe, an arm of the sea, on the West Coast of Scotland. I was born in Lismore early 1990, an experience I hadn’t intimately considered until the birth of my son a couple of years ago. My son was conceived in the Nancy Fairfax Artist in Residence Studio at Tweed Regional Gallery. There’s a pair of hoop pines (aka Richmond River Pines) that dominate the side view from the residency verandah. I often use these trees, along with banksias, within my work to represent the Northern Rivers region, my transition to motherhood and European exploration/invasion of Australia.

The works in 'Arm of the Sea and the Fertile Tree' use landscape metaphor rather than subject. Intimate personal experience and collective experience are translated into paintings, bedspreads, windows, still lifes and stages.” 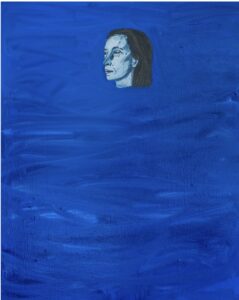 Sally Anderson's work 'Claude Swimming' has been selected as a finalist in the Portia Geach Prize for 2020. The painting of Claudia Karvan, actress, producer and writer will be exhibited at the National Trust's S.H. Ervin Gallery from 14 August – 20 September 2020.

The Portia Geach Memorial Award is Australia’s most prestigious art prize for portraiture by women artists. The Award was established by the will of the late Florence Kate Geach in memory of her sister, Portia Geach. The non-acquisitive award of $30,000 is awarded by the Trustee for the entry which is of the highest artistic merit, ‘…for the best portrait painted from life of some man or woman distinguished in Art, Letters, or the Sciences by after any female resident who was born in Australia or was British born or has become a naturalised Australian and whose place of domicile is Australia’ 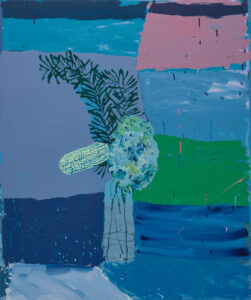 In Issue 44, 2018, Sally Anderson spoke to Artist Profile Magazine about how the deeply autobiographical, the metaphorical and the observed intertwine in her painting practice.

'My paintings talk of relationship, context and metaphor. They are loaded with autobiographical content, draw on past and present experiences and often arrive in pairs. Recent paintings use abstraction, still life and borrowed landscapes to reference everyday intimate experience held in object and place. They explore the self and use abstraction, landscape and still life as devices to do so.' Sally Anderson Sally Anderson's work ‘Guy’s Painting of Wollumbin on my Wollumbin’ 2018, acrylic on linen, 140 x 122cm has been acquired by Tweed Regional Gallery. In 2017 Sally was an artist in residence at the Nancy Fairfax Artist Residency through the Tweed Regional Gallery and throughout her life, has had strong connections to the region. Congratulations to Sally Anderson who is a finalist in the Paddington Art Prize 2018.

The Paddington Art Prize is a $30,000 National acquisitive prize, awarded annually for a painting inspired by the Australian landscape. The prize encourages the interpretation of the landscape as a significant contemporary genre, its long tradition in Australian painting as a key contributor to our national ethos, and is a positive initiative in private patronage of the arts in Australia.

This work uses ‘borrowed landscapes’ to look at ways we experience the Australian landscape from the comfort of our homes. It uses landscape as a device to demonstrate a shift in the way we experience landscape. Sally Anderson's recent exhibition 'Self Storage and the Really Real' is featured in the January edition of the Art Almanac.

'“Self Storage and the Really Real’ looks at ways we authenticate experience and store memory in object and place’, says artist Sally Anderson whose abstract compositions brim with clear references to past experiences; from the hydrangeas at her childhood home to shells from the Muséum national d’Histoire naturelle, and Norfolk Pines from recent Instagram posts to landscapes from past and present relationships. These works are a visual archive giving permanence to intangible memories and making them, as the title implies, ‘really real’.' Sally Anderson has been awarded the Brett Whiteley Travelling Arts Scholarship for 2017.

The prize is $40,000 and a three month residency at the Cité Internationale des Arts in Paris, administered by the Art Gallery of New South Wales.

The annual Brett Whiteley Travelling Art Scholarship is open to Australian artists aged between 20 and 30. It was created from an endowment left by Beryl Whiteley, who witnessed the profound effect that international travel had on her son Brett Whiteley, as a result of him winning the Italian Government Travelling Art Scholarship at the age of 20. Sally Anderson has been selected as a finalist in Newcastle Art Gallery's Kilgour Prize.

In 1987 artist Jack Kilgour bequeathed funds for the creation of a figurative and portrait art competition to be run in perpetuity at Newcastle Art Gallery. Today the Kilgour Prize is one of Australia's major art prizes and awards $50,000 for the most outstanding work of art as determined by a panel of three judges, and $5,000 for the People's Choice Award, as determined by votes from the public.

SALLY ANDERSON ON THE DESIGN FILES

Iconic Australian blog The Design Files visited Sally Anderson in her studio recently, to see how things were progressing in the lead up to her first solo exhibition.

'Working predominantly with a muted colour palette, the artist will often add an unexpected contrast, like a brush of bright magenta. ‘For me, working with colour is very intuitive; I might spend weeks working with dusky colours, only to come in one day needing to mix a cyan blue,’ she tells.

The paintings are an ongoing process of adding layers and marks. Sometimes Sally will paint over a work in her studio that she’d thought she was long done with. ‘My partner once said that my pieces are a bit like découpage… with individual snippets and cut-outs layered heavily onto a surface,’ she says. ‘My mum has always loved crafts and used to actually découpage the furniture in our house… maybe that’s unknowingly made an impression on me!’